Groupe Acrobatique de Tangier from Morocco have been honing their traditional acrobatics on the beach of Tangier for many years. Travelling round the world performing spectacular tumbling and balancing acts at traditional attraction parks and events, until they met Sanae El Kamouni who introduced them to French contemporary theatre director Aurélien Bory.

The group collaborated on a new work Taoub, embracing a new concept; blending traditional Moroccan acrobatic skills with contemporary theatre performance. Anchored by a loose narrative that highlights contemporary and traditional aspects of Arabic culture, Taoub combines Bory’s outstanding choreography and visually stunning direction with the grace, strength and elegance of the acrobats.

Attracted by a willingness to re-purpose the work, whilst honouring traditional Moroccan circus, Crying Out Loud introduced Groupe Acrobatique de Tangier to the UK, first programming Taoub at the Southbank’s Queen Elizabeth Hall and then touring it to the regions in 2006 followed by a second run at London’s Roundhouse in 2007 as part of Circus Front (now CircusFest). Crying Out Loud also brokered a run of Taoub at The New Victory on 42nd Street, New York City in 2009

Chouf Ouchouf, was their second large scale work, a collaboration with Swiss artists Zimmermann & de Perrot explored the life in the medina using ingenious moving towers to conjure up day to day life and its many challenges.

The group also performed at Piccadilly Circus Circus on a stage in the middle of a pedestrianised Regent Street, part of the secret pop-up circus for The Mayor of London’s Surprises for the London 2012 festival.

In 2012, film-maker Deborah May, cameraman/artist David Gopsill and Crying Out Loud’s artistic director Rachel Clare travelled to Morocco, to film in Tangier to find out how Taoub was made, and how Chouf Ouchouf was inspired by the Medina, the city’s bustling old quarter. The film, Circus in the Medina, was broadcast on The Space in the same year. 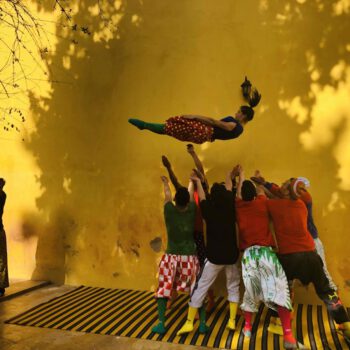 If you would like to find out more about our activities, please sign up to our mailing list. Just let us know if you’re a promoter or a member of the public when you do so.